Thank you Giuseppe, you made European Scouting proud! 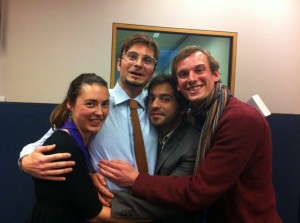 Giuseppe and our WOSM representatives in the European Youth Forum

Today Giuseppe Porcaro, outgoing Secretary General of the European Youth Forum, starts his last day at the Brussels headquarters of the organisation.

With his 5 years of hard work, he made European Scouting proud! His leadership in the Youth Forum further contributed in strengthening the cooperation of European youth organisations in shaping policies for young people all over Europe.

During these years, Giuseppe was able to lead the staff members of the European Youth Forum Secretariat through the crisis with competence, vision and ambition. His term as Secretary General saw the growth of the membership of the platform, the affirmation of the Youth Forum as a solid reference for youth policy, an increased co-funding through partnerships as well as the development of the YO! Fest and the League of Young Voters.

Giuseppe has been a member of AGESCI and former key volunteer of the European Scout Region. Some highlights about his path from Marigliano (his hometown in the Naples province) to the capital of Europe Brussels include the founding of the Italian National Youth Council (Forum Nazionale Giovani), working in WOSM Brussels office, representing WOSM in the Advisory Council on Youth of the Council of Europe, working as a consultant for the World Bank and then as UN and Global Youth Affairs officer in the European Youth Forum.

This last April he gave a farewell speech to the representatives of the Member Organisations of the European Youth Forum, encouraging them as youth leaders to keep working to create a new Politics of Hope for Europe, a positive narrative in which young people are the architects of their bright future.

This “voyage extraordinaire” of Giuseppe has come to an end, but a lot of success awaits him ahead. We are sure about that. With this, we wish Giuseppe good luck and all the best for his new adventures!

[The full transcription of his inspiring farewell speech is here: http://porcarorama.eu/dir/?p=136. Read it!]