(WOSM Europe) – Eight months have passed since the previous International Youth Gathering for Cultural Exchange in Oman last September (read Josmar’s story to find out more about that event) and those of you who were lucky enough to be part of that event will no doubt still recall plenty of memorable moments and cherish many friendships built across cultural and linguistic boundaries.

Following the growing success of similar events in the past, the Arab Region of the World Organization of the Scout Movement (WOSM) is once again inviting Scouts (18 to 22 years old, male only) to an International Youth Gathering for Cultural Exchange. This time, it will take place in Egypt from 28 August to 6 September 2014 and a rich programme again awaits Rover Scouts from around the world. 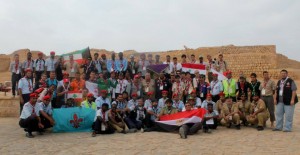 “Spreading the culture of peace and mutual understanding between young people remains one of the principle goals of this event”, say Atif Abdul Mageed, Regional Director of the hosting Arab Scout Region, “but we also want to raise the level of awareness of participants in relation to the values and principles of humanity. Another goal is to help consolidate the bonds of friendship among the participants from the National Scout Organisations (NSO).”

This year, an interesting programme has been built which will contribute to achieving the goals of the event:

– A number of workshop sessions allowing cultural exchange, with Rovers from each participating NSO encouraged to showcase their country with an emphasis on civilization, culture, geography, local customs and traditions, as well as specific cultural values;

– A colourful International Evening during which the participating delegations will have the possibility to present their countries national art and costumes as well as sample of their typical food and Scout traditions;

– A series of excursions during which participants will explore the cultural and historic heritage of Egypt.

If this sounds interesting enough to you, the Arab Regional Scout Office is happy to receive your application form under the following conditions:

– The Arab Region will cover the participation fee and local costs for up to two male Rover Scouts (aged 18 to 22) from any given NSO;

– Participants must be active members of a recognised NSO;

– Participants should not have attended a previous similar gathering (the Arab Regional Scout Office will cross-check this).

You are not yet convinced to spend ten days under the Arab sun? Then perhaps you want to watch Matt’s stunning video report of last year’s Gathering or read Josmar’s story, in which he relates his 1001 experiences during the 16th IYGCE, which took place in Oman last autumn!