Another great year for UK Scouting and plenty more to come!

(TSA, Gilwell Park) – Only the other day, The Scout Association (TSA, the National Scout Organisation in the United Kingdom) celebrated personal achievements at a big party hosted by Her Majesty at Windsor Castle on the occasion of Saint George’s Day. And yesterday, more quite impressive reasons to celebrate were disclosed allowing a very optimistic look into the future of Scouting in the United Kingdom: read here yourself a slightly revised version of an exciting news story published on TSA’s website yesterday! 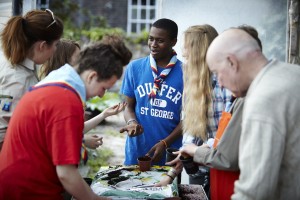 The Scout Association is officially the largest co-educational community-based youth charity in the UK; there are now 550,457 people involved in the Scout adventure. According to this year’s census, which is carried out annually to identify trends and development areas in the Movement, UK Scout membership has grown by 100,000 in 10 years, increasing from 450,455 in 2004 to 550,457 in 2014. This year’s census also reveals that the number of adult volunteers involved has grown by 14,596 to 104,281 in just 10 years. Female membership has gone from 69,996 to 128,042.

Wayne Bulpitt, UK Scouting’s Chief Commissioner, is in no doubt where the success for the growth of the Movement lies: “Scouting offers young people and adults alike a chance of real adventure. It changes young people’s lives and the communities in which they live for the better.”

Scouting has piloted a number of innovative projects to help grow the Movement in the country, bringing it to new communities and working with more partners. Over the past 18 months the association has focused on delivering its youth work in more deprived parts of the UK, using funding supplied by central government via the Youth United Foundation. This funding has enabled The Scout Association to recruit 1,553 more young members and 315 adult volunteers in areas like Newham, Salford, Burnley and Merseyside. Scouting has changed hundreds of thousands of lives and there are big plans to make even more of a difference.

The Plan for the Future

“Scouting for All”, UK Scouting’s strategic plan covering the next four years, will make sure the Association achieves its Vision for 2018: to make Scouting available to the next generation of young people.

“We have a clear plan to make our Movement more diverse, more community-focused and more youth-led in the next four years,” says Wayne, “Ultimately, this means we want to recruit another 18,000 adults by 2018 so that they can help offer life-changing adventures to 58,000 more young people.”

The plan for the next four years will focus on the following four objectives:

The plan has been developed in partnership with adult volunteers and young people from across the UK (both active Scouts and young people not in Scouting) and is designed to ensure in 2018 Scouting will be enjoyed by 500,000 young people across the country from every background (work is already under way to reach out to new communities).