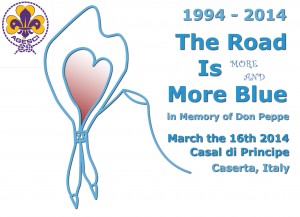 It had to be the “nightfall” and the victory of darkness. Yet, the myopia of Mafia did not understand that the seed was sown and planted. March 16th became the day of the redemption! That’s what we want to celebrate in 2014: there are many fruits sprouted in an adverse though fertile land.

Memory is not enough, we need strong awareness that becomes passion, turning into concrete acts.
We are deeply aware that the road ahead is still long and upward, but we feel pushed by the wind of hope, blowing stronger and stronger, by the conviction that life always wins over death.

The memory of the funeral of Don Beppe is still alive in our mind as well as the memory of his mother Iolanda wearing his son’s Scout scarf, crying for his death.

That Scout scarf is a strong call to our responsibilities, first of all to nurture the flame of memory and commitment, and never forgetting our feelings of warmth and friendliness to mother Iolanda and don Beppe’s family .

Don Beppe was one of us! A Scout.

ON 16 MARCH, “THE ARMY OF THE SCOUT SHIRTS” WILL FLOOD AGAIN THE STREETS OF CASAL DI PRINCIPE.

After twenty years, the “Sheets of protest” displayed during the funeral of don Beppe Diana will be transformed into ” Sheets of Rebirth and Commitment “.

Scout will show on their sheets how they have concretely lived the transition from “The land of Camorra” into the “Land of Don Beppe”: telling about the activities and the experiences carried out on this territory and the projects and commitments they want to take for the future.

Read here the words of Don Peppe Diana in his testament.