(WOSM Europe/Geneva) – Andrea Demarmels, Chairperson of the European Scout Committee, has just returned from Sofia, where he and Jordan Bajraktarov, from the European Regional Office of the World Organization of the Scout Movement (WOSM), had spent three days with members of the National Leadership of Организация на българските скаути (OBS, Organization of Bulgarian Scouts, the National Scout Organisation in that country).

“The purpose of our visit was to better understand the current situation within OBS on local and national levels and to demonstrate our Region’s firm commitment to helping the association in its strategic and organizational development”, explains Andrea. 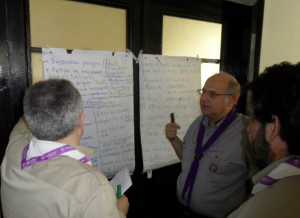 Workshop session at the headquarters of OBS

In addition and in order to help raise OBS’ profile within the country meetings with members of Bulgaria’s National Assembly (Народно събрание, Narodno sabranie) and representatives of the Department of Youth in the Ministry fro Sports, Youth and Science had been arranged.

“I think”, says Andrea, “that both the workshop with the National Board of OBS and our meetings with Bulgarian politicians were very successful: the State has now recognized OBS as official youth movement, which will mean that for the moment organizational and in the future perhaps also economic support will become accessible. It was also agreed that OBS and relevant parts of the National Administration would remain in contact.”

“Our discussions with OBS showed that there is urgent need to provide assistance in organisational development: for example, at the moment the national level is relying on very few people”, adds Jordan, “However, OBS is still by far the largest youth movement in the country and the authorities have now recognized this fact”. 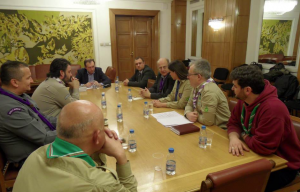 Meeting Members of the National Assembly of Bulgaria

“We managed to agree on an overall strategy and a national action plan 2014-2016 which focuses on 18 points, including programme development for all sections (Cubs, Scouts, Ventures and Rovers) and a redesign of the Leader training scheme. Other points in the agreed plan include the introduction of inductions for new adult volunteers, the development of a communications’ strategy and increased contacts with authorities”.

Summing up the Region’s field visit to Bulgaria, Andrea felt that strong and well-coordinated long-term support for OBS was necessary. He was happy that a number of partners had already signalled their continued support in this undertaking, including Scouts et Guides de France and WOSM’s Messengers of Peace initiative. He had also sensed a strong commitment from the National Leadership of OBS, which he saw as a paramount factor for success. The Region will continue to monitor the development in Bulgaria and support the local Leadership under the coordination of Daggi Elehu, the Region’s Committee Contact for this NSO.