(FNEL/Luxembourg) – Yes, even in Luxembourg, during a cold winter nights the temperature  can be as low as -15° centigrade. Reason enough for eight members of the Unité Pilote (Venture Scouts aged 15 to 18 years) of the Lions Bleus Bonnevoie Scout Group  in Luxembourg to plan and run a very special project in the framework of their activities to obtain the highest distinction for Venture Scouts in their association (FNEL).

“Let’s collect old sleeping bags!” they said and established contacts with “Stëmm vun der Strooss” (Get off the Street), a national association specialized in providing help and counsel to the countries’ homeless. “We did not just want to hand over old sleeping bags”, recalls the Group’s Leader Pitt Sietzen, “but we also wanted to learn more about the difficult circumstances and living conditions of our homeless neighbours. It’s really very desperate: no home, no job, no food, no social life. And many are never prepared when the cold temperatures and wet weather arrive in our city.” 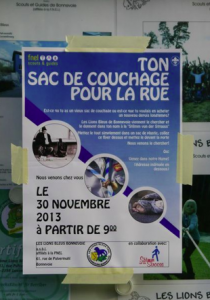 The Poster – calling to help the Scouts help

The idea to collect and donate sleeping bags was well received and so, the ventures started to put their plan into practice. Designing flyers and poster (in our two languages), creating posts on social media channels, talking to younger and older Scout Group members, neighbours, friends and people in the streets, organising a vehicle to help collect the sleeping bags, setting up the collection point, prepare tea, coffee and biscuits for collection day, and many more details needed to be talked through and organised.

“Finally, 30 November, the big day came.”, remembers Pitt Sietzen, “Everyone was busy that day: some drove up and down the streets of the city stopping at house where people had agreed to donated sleeping bags, others remained at the central collection point to receive sleeping bags brought in by their former owners.” 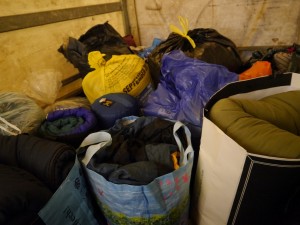 The surprise was great when the eight tired Venture Scouts from Lions Bleus Bonnevoie and their helpers counted the sleeping bags after a very long day: forty (40) bags! Thanks to the generosity of their friends, families and neighbours the Venture Scouts were able to provide “Stëmm vun der Strooss” with a large number of sleeping bags.

And many homeless in Bonnevoie in Luxembourg will receive a very special Christmas gift this year: a sleeping bag bringing some warmth to help survive the cold nights of winter.