“On the Road”: Austrian Scouts and Guides cycle through their country to promote their Movement and healthy lifestyle

(PPÖ/Vienna) – “Movement” is the main programme motto of the Pfadfinder und Pfadfinderinnen Österreichs (PPÖ, Guides and Scouts of Austria) this year and many different activities and programme proposals have been developed to help get the message across.

“If you are on the move, there is progress”, explains Ulrich Gritsch, Chief Scout of PPÖ, “and those who remain static, do not get on. As you know, as Scouts and Guides we are constantly called to adjust in order to be able to offer an attractive programme to children and young people. That is also why we are called Movement. We want to emphasise this with a series of activities and projects throughout one year, both within our Movement and in the public. For example, among the major internal projects this year we have planned a review of PPÖ’s Leader Training and the presentation of a new tool-kit on spiritual development.” 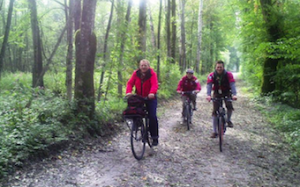 On the Road: through the forest

And a remarkable challenge accompanies a series of different local, regional and national activities: Scouts and Guides across the country are “on the road”: on 13 August 2013, during the Upper Austrian Regional Jamboree (Planet 2013), a special “On the Road”-bicycle started its “Tour d’Autriche” in St. Georgen im Attergau. 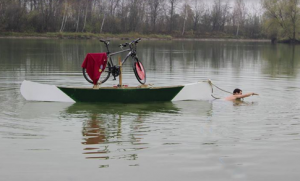 On the Road: across the river

So what is the ambitious aim? “The idea is to visit all 308 Austrian Scout and Guide Groups before returning to Bad Hofgastein in time for the opening of the Salzburg Regional Jamboree (Wurzl 2014) on 4 August 2014”, says Gitti Krepl, PPÖ’s Chief Guide, “And this means cycling some 4000 kilometres across all nine provinces. A detailed routing and rigorous timetable are prerequisites to ensure this project is successful.”

With Christmas just a few days away, the bicycle has already been to most of the Groups in Upper Austria and in many Groups in Lower Austria: each local Group receives the bike from its neighbouring Group, keeps it for a day or so and then one of its members cycles it on to the next Group. A special Facebook page allows everyone to follow the progress and provides space to share special stories and anecdotes around the “On the Road”-bike as well as souvenir photos. 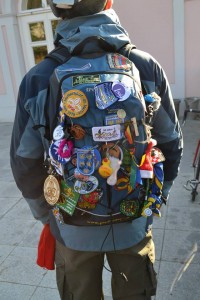 On the Road: Souvenirs from each PPÖ Group visited so far

“This project not only helps promote our annual motto”, says Ulrich Gritsch, “but it also literally puts the people on the move. It promotes cycling as a mode healthy means of transport. And when it is cycled from Group to Group this is mostly combine with some larger Group activity.” And Gitti Krepl underlines the promotional impact of the project: “Many local newspapers and radio stations have already featured the story of our special bicycle. The project therefore also carries a positive image of Scouting and Guiding as an active youth movement. It may well be that new children and young people have already joined a Group because of the positive feedback and media coverage in local communities!”

2 Responses to “On the Road”: Austrian Scouts and Guides cycle through their country to promote their Movement and healthy lifestyle