(WSBERO/Genève) – One of the Resolutions adopted by the recent 21st European Scout Conference tackles the important issue of young adults increasingly moving to other countries. These young people are students wishing to accomplish part of their studies abroad, or job-seekers willing to experience working in another country. Many of these increasingly mobile young adults are Scout Leaders, a lot of whom have a desire to remain active in the Movement in one way or another. This phenomenon has lead some National Scout Organisations in the European Region of WOSM to offer specific services, called “Erascout” in France, “Erasmus Scout” in Belgium, “ErasmuScout” in Italy, or “Scoutasmus” in Spain. And perhaps yet differently in other countries.

We have spoken with Ombeline, from Les Scouts (Belgium) and Christian, from Scouts et Guides de France, two of the pioneer associations active in this field to find out more about the services on offer.

“Erascout is a system which allows young adult Scouts (and Guides) who study or work abroad to easily find and engage with a local Scout Group,” says Christian, “In fact, volunteers responsible for Erascout in our association provide advice and support the young adults while they are still at home or shortly after their arrival in their new country to establish first contacts with an appropriate local Group and their Leaders close to their new place of study or work.” 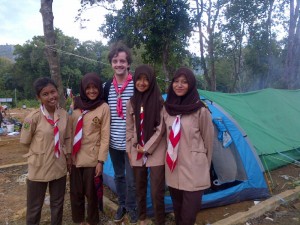 Leo, from SGdF in France, with members of his ‘temporary’ Scout Group in Indonesia

“This system is a very good example of the international dimension of the Scout Movement”, adds Ombeline, “and all three parties involved are winners! The young adult newly arrived in town and volunteering in one of the local Scout Groups rapidly links into a well-established local network, which in turn facilitates integration in the new neighbourhood. Experiencing Scouting practices of a different association are enriching, both personally and for the home association, once the young adult returns home and shares acquired new Scout customs.”

“For the local Scout Group, an additional Leader is always welcome. And it brings the international dimension of Scouting to the local level, which is also enriching. Long lasting partnerships between local Groups of different countries have thus been created.”

The system is also valuable for the National Scout Organisations concerned, as Christian points out: “Young Leaders with rich memories and experiences in Scout Groups of different associations represent an important asset. They are more likely to be familiar with similarities and differences within the member associations of the Scout Movement, and with related different local traditions and common foundations. Their contacts across boundaries are also valuable and may in turn help other young adults when considering moving to another country.”

“Of course, the engagement of the young adult abroad can take different forms”, says Ombeline, looking back at the experiences of some members of Les Scouts in the past, “Some may only want to offer their help on an ad hoc basis for a particular event or project, while others might be willing to actually integrate the team of Leaders of a local Scout Group.”

And a different language is rarely a problem. On the contrary, it is another value young adults will return home with, including, of course, local Scout terminology.

“The system is not limited to countries in Europe”, underlines Christian, “some of our young adults moved to countries as far away as Canada, the United States or Australia, or as exotic as Singapore, Bolivia or Benin”. And they always came back with memorable experiences and a long list of new friends and contacts. 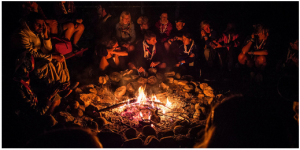 For practical reasons, the young adult remains member of his or her native association during the period abroad. This makes it easier to reintegrate the old Group once back home.

So, how do the young adults themselves see this system? Here is what Nicolas (Belgium), discovered while spending some time in Italy: “What struck me most when volunteering on local level in Italy was the relatively small difference with what I had experienced with my Group in Belgium. Of course, there are differences in the form, some details are indeed different, but overall both Groups do similar things. When I returned from the meetings of the Group I always noted down rules of new games or lyrics of new songs in my diary. I hope to be able to introduce them at home. Volunteering in the local Scout Group in Italy has largely helped me improving my language skills. Indeed it was during the hours spent with the Scouts that I progressed most. It is in this environment that immersion is really total: no possibility to escape to another language with 6 or 10 year-olds, as it might be possible at university. And exchanges with young people are usually free of complexes: no problem for a small grammatical error here or a wrongly used term there. For them it is just another game. They correct you and enrich your vocabulary.”

And it also works the other way round: Kristen (German) came to France and volunteered in a local Group: “I can only recommend this experience! Even if it is more exhausting and perhaps more challenging to work with young people in a foreign language, which you may not fully understand or master, it is worth every effort! My French is now a lot better, and this is because I was forced to use that language when helping out in the local Group. It was also valuable to meet French children and young people and see the conditions they live in. As a simple exchange student living in a hostel you would never get that insight.”

A number of European NSOs currently offer support to young adults envisaging spending some time abroad while remaining active in Scouting. If you do the same, why not contact them and find out more. And if your association is not yet active in this field, maybe you can encourage your national team to get involved?

To our knowledge, support is currently available in France (SGdF), in Belgium (Les Scouts and SGV), in Spain (FCEG), in Italy (AGESCI) and in Portugal (CNE) . If your association is missing in this list, let us know and we will add its name and relevant details.

2 Responses to “Erascout”, “Erasmus Scout”, “ErasmuScout”, “Scoutasmus”: many names – one goal: Volunteering in Scouting while studying or working abroad