Berlin/WSBERO) – The emotion was palpable yesterday afternoon when the 21st European Scout Conference came to a close after five very busy and intense days in Berlin, Germany.

Earlier during the last day of the Conference, the outgoing European Scout Committee had handed over the responsibilities to the members of the new Committee, who received the Region’s purple scarf from their predecessors.

Andrea Demarmels, newly elected chairperson of the Committee, and his team had already been busy, facilitating a number of workshops during which participants were encouraged to share comments and elaborate concrete actions. Some interesting ideas were gathered and will help the Region to achieve objectives set in the new Regional Scout Plan ( English, French).

The last session of the Conference saw some 270 delegates from 39 National Scout Organizations from all over Europe discuss a series of draft resolutions. Three draft resolutions had been proposed by the European Regional Committee and concerned the Regional Scout Plan 2013-2016, the Regional Fees and the future of the Region’s Partnership Fund. An additional draft resolution proposed by the European Scout Committee, which addressed the future partnership with WAGGGS, had also been tabled at the concurrent 14th European Guide Conference. With some minor amendments all these resolutions were adopted and will form a substantial basis for the Region’s work during the coming three years. 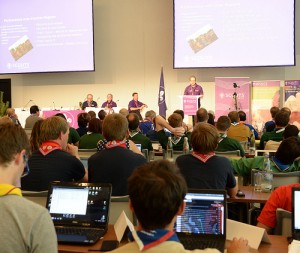 A record total of ten resolutions tabled by National Scout Organizations were also adopted and addressed a variety of issues, including two resolutions concerning the current reorganisation and relocation of the World Scout Bureau. Other issues addressed related to the cost of Regional events, the financial crisis affecting countries in the Region in general, and the climate change and the relevance of Scouting’s role as a valuable lobbying partner in intergovernmental fora concerning this issue.

Other resolutions asked the Region to take appropriate actions to facilitate a better inclusion of migrant youth in the Scout Movement in Europe and to provide more publicity to the Erascout Programmes already existing in a number of NSOs in Europe. The strengthening of networking, cooperation and interconnectivity of NSOs of the Region was the theme of another resolution, while another one shared the Region’s concerns with regards to recent developments in the middle east and their impact on young people in that region.

Later during the afternoon the 14th European Guide and Scout Conference reconvened for its final session, when two draft business recommendations where discussed and approved. One recommendation concerned the venue of the 15th European Guide and Scout Committee: a large majority welcomed the bid of Speidernes Fellesorganisasjon (the Guides and Scouts of Norway), who will host the Conference in Norway in 2016.

The other recommendation concerned the future strategic partnership between the Europe Region WAGGGS and the European Region of WOSM which will form the basis of work in partnership for the next six years.