(WSBERO/WSBARO/Rome) – More than fifty participants from some 24 National Scout Organisations from both the European and the Arab Region on the World Organization of the Scout Movement (WOSM) are gathering in Rome this week for the tenth edition in a series of regular exchanges held over the last couple of decades.

“The main aim for our meetings is to offer an opportunity of exchange and networking”, explains Henrik Söderman, Vice Chairperson of the European Regional Committee, who was part of the planning team this year, “Over the years, the Euro-Arab Meetings have proven to be very useful for those associations in Europe and the Arab countries which are already engaged in partnership projects. But the possibilities for learning from success stories and challenges, for sharing knowledge and for making new inter-regional contacts are even more important for associations which are considering starting a bilateral or multilateral project.” 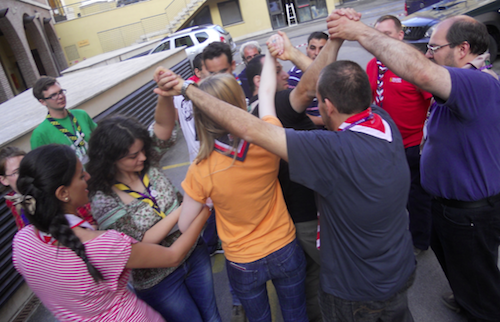 The two Regions and the hosting Federazione Italiana dello Scautismo (FIS) have put together a tight programme offering participants many possibilities to engage in dialogue and to hear details from current partnership projects. Experiences gained in past projects are reflected in a set of new “Guidelines for Euro-Arab Youth Exchanges”, which the participants of the Meeting will review and discuss during the event (the reviewed Guidelines are part of the “Rome Declaration“).

The participants will not only be confined to the excellent meeting facilities offered at the Roma Scout Centre, as interesting inter-cultural and inter-religious components have been included to the programme. They will travel to Europe’s smallest country Vatican City (with Andorra one of only two countries in Europe, where the Scout Movement is not present), to meet with representatives of the Catholic Church and they will by welcomed by religious leaders at the Mosque of Rome. Another visit will take them to Palazzo Madama, seat of the Senato della Repubblica, the second chamber of the Italian parliament, where they will engage in a debate on matters concerning young people and citizenship.

At the end of the 10th Euro-Arab Meeting, a declaration on the future steps in the cooperation between the Arab and European Regions of WOSM is likely to be adopted, which will provide a sound framework for new and inspiring partnerships between NSOs of both Regions.

For more information:
The “Rome Declaration and Revised Guidelines for Euro-Arab Youth Exchanges” (bilingual, in Arabic and English).

One Response to European and Arab Scouts Meet in Rome