(PPÖ/Klosterneuburg) – The first days of June 2013 will be remembered for some time in Austria. The country had not seen something like this in ten years: it had rained for an uncountable number of days. And from minute to minute more water fell down on fields, streets, villages and towns. Added to this was the growing amount of water in the rivers due to snow melting after a particular long winter. 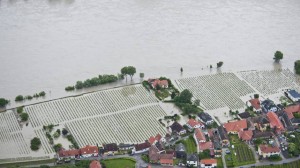 Austria: the Danube floods villages and fields in June 2013

„A lot of us still recalled the record high floods that had struck our country in 2002“, reports Paul Medek, a Group Scout Leader in Vienna, „and vivid memories of devastating consequences and laborious efforts to clean away the mess immediately came back.“

„A number of us in Pfadfinder und Pfadfinderinnen Österreichs (PPÖ, the National Scout Organisation in Austria) had been giving a welcome helping hand back in 2002 and it was only natural to offer our services again this time“, explains Thomas Pfitzner, a former member of PPÖ’s National Board. 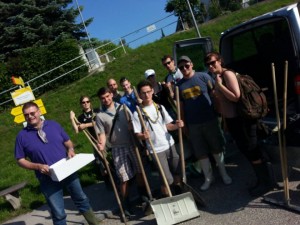 Rovers, Rangers and Leaders ready to give a helping hand

And so, the morning of 9 June 2013 saw 162 Rover and Ranger Scouts, as well as Leaders essentially from the provinces of Vienna, Lower Austria and Carinthia gather in Emmersdorf, a small village near Melk on the banks of the river Danube. All suitably equipped with wellingtons, shovels, broom sticks or more heavy gear. In close cooperation with members of the local fire brigade (also a volunteer based organisation) and soldiers from the Austrian Armed Forces, small teams of ten helpers started to clean streets, pedestrian ways and private front yards, while other parties helped collect a great variety of debris left behind by retreating high waters.

„It was really incredible“, recalls Paul, „the mud was everywhere, and with the rising temperature water had evaporated and turned all this mud into a concrete-like substance. It was very exhausting as it required extra effort to actually shovel this away: for example, it took a group of fifty (!) Scouts three (!) long hours to clear a simple front yard of the huge amounts of mud the flood had deposited there.“ 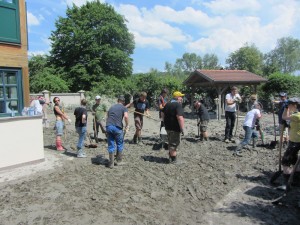 Three hours of work: clearing a front yard of mud

Halfway through the day, some of the group moved on to another village, which had also asked for some help. Where the Scout’s service was once more welcomed by the local population.

Cool drinks and other refreshments were not the only reward the Scouts received, points out Thomas: „Everyone really worked hard during that day. But the many happy faces in the villages, which reflected the great relieve and sincere gratitude, were worth our efforts. I am sure that we will do this again next time. Although we share the villagers’ hope that a similar devastating flood will not happen again too soon!“

A great „Thank you!“ to all Scouts and Leaders involved in Austria. But also to numerous Scouts and Leaders engaged in other Central European countries affected by the floods in early June 2013. The list below only reflects some of the activities; many other similar support may have been launched of which we do not know (yet):