(WSB-ERO/Geneva) – Thirty-four young Rover Scouts representing 14 National Scout Associations from twelve countries across Europe came together in Kandersteg during the second weekend in April for this year’s Agora.

Agora, which means ‘meeting place’ in Ancient Greek, is an annual event hosted by the European Region of WOSM for Rover Scouts, which is organized and run by the Rover Scouts themselves. The participants come together to discuss all things Rover and much more. While youth empowerment and youth participation are key elements at each event, the theme of this year’s Agora 2013 was “reaching out”. 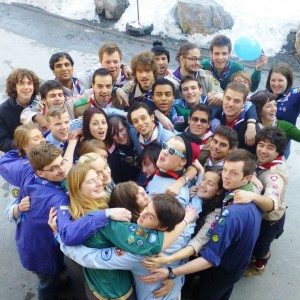 Zack, from the Scout Association of Malta, explains: “The main objectives were to learn about how we work as Rovers in our Scout Associations, what our programme is like and what sort of a role we play in our association.” And Morgan, from Scouts et Guides de France, adds: “We also aimed at gaining knowledge and acquiring resources that could be useful for Rover Scouting in the different associations. For this, we had plenty of small discussions and other possibilities for sharing experiences of issues relevant to Rovers today.”

The memorable setting and the international Scouting atmosphere offered by the Kandersteg International Scout Centre (KISC) helped the participants to feel inspired, motivated, empowered and ready to return home to offer the best Rover Scouting in their associations.

Pau, from Federació Catalana d’Escoltisme i Guiatge, and Maija, from the Scouts and Guides of Finland, mentioned that the group was quite diverse, as the associations had selected participants in different ways: “Some of us were selected because they are members of our National Rover Team, others because they are Rover Representatives for their local or regional area. And quite a few were selected by Rovers attending National Agora events.” Yet other participants had a sound background in Scout events or specific projects related to youth participation. Pau adds. “There were even a handful who were not yet Rovers, but who had been selected so that they would get a sense of what Rover Scouting could offer as they begin their new career as Rover Scouts.” 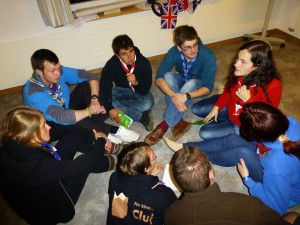 André, from Corpo Nacional de Escutas, recalls. “For five days we really worked very hard. We discussed Rover Scouting in general, youth empowerment, project management and our involvement in decision making. The project management bit was in fact a practical exercise: A network of ‘Agorians’ was created which will include all those who have taken part in this and earlier editions of Agora.”

And Sigurgeir, from Bandalag íslenskra Skáta, adds: “Our minds were opened up as we learnt about how Rover Scouting is organised in each of the different associations that were represented, for example, we learned that in Lithuania, Rovers are something secret that no one really knows anything about and that in Portugal, Rovers are not yet Leaders in younger age sections whereas in many other countries they are.”

“Now you may ask, what came out of Agora, what did we learn as participants?”, says Jesús, from the Federación de Asociaciones de Scouts de España, and gives the reply himself: “Well, let me tell you a few of the most important things that came out of it. After experiencing Agora, we were able to come home with great resources for Rover Scouting in our own countries. Resources to make Rover Scouting better in our own associations and resources that will be very useful in our day-to-day lives as Rovers.”

“We also came to common conclusions on involvement in decision making,” add Ioana, from Cercetasii Romaniei, and Marc, from Scouts et Guides de France, “We think that Rovers are not included enough and that there are better and more democratic ways of coming to decisions, not only at a lower level, but also by us being closely involved on regional and national levels of our associations. We strongly believe that if we should ‘bring’ our experience to our associations, it is not enough to only write a report or some small project afterwards. We should be given more and concrete opportunities to share what we have learnt from Agora and spread the word.”

The planning team was made up of four Rovers from Ireland, the UK and Portugal – Ciara, Maíre, Nandesh and Xavier, all of them participants of previous European Agora events. They were a great team and they did a brilliant job. And both participants and planning team look forward to Agora 2014. Will you be part of the team next year?

For more information:
Agora 2013 on the Internet and on Facebook

One Response to Agora 2013: Rover Scouts Reach Out and Network