(Suomen Partiolaiset-Finlands Scouter/Langtang, Nepal) – In the framework of a partnership project between the Scout Associations of Finland and Nepal and after memorable experiences at the 2nd National Nepal Jamboree earlier this month, the last stage of an adventurous expedition of 33 Finnish Scouts is about to start: the ascend of Baden-Powell Peak (5718m) in the Himalaya massif in Nepal. 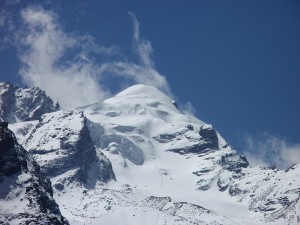 “Scouting is all about exploration and leaps to the unknown”, says Jennamari Terävä, the expedition’s Leader, “The exploration starts when a young cub scout scratches his or her first matches and breathes life into a flickering flame while others cheer and help along.”  And as the Scout grows older, new adventures and explorations contribute to further widening his or her horizon and adding to lifelong and memorable experiences.

The Langtang Valley and Baden-Powell Peak

“It is sometimes necessary to climb a high mountain in order to bring about something good”, says Jennamari.  And even though the experience and adventure will be exciting for all young adult Scouts involved, climbing the summit cannot be taken for granted: “We will put safety first and make sure to respect the mountain and the conditions awaiting us.” 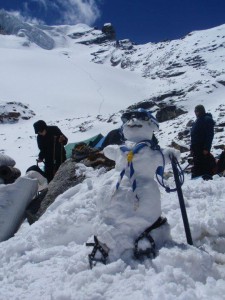 It is in fact the second time Finnish Scouts are in Nepal to climb Baden-Powell Peak, aptly named after Robert Baden-Powell, the Founder of the Scout Movement, to mark the 100th anniversary of the Movement in 2007. A previous expedition in 2010 was very successful and several of the then participants are now part of the expedition’s staff team and were valuable help as the team prepared it adventure during the winter. 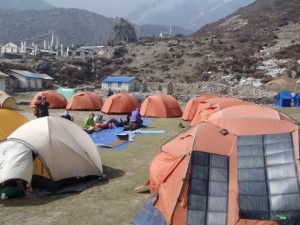 As the expeditions was waiting for best weather conditions for the final climb, they look back on more than one year of preparations: “We made sure everybody was familiar with Nepal, its culture and geography, the area and the mountain itself, the routes and the tour operator”, recalls Jennamari, “And we arranged for sufficient local support to be available in the form of carriers and guides, accommodation and nourishment.” And of course contacts with the Nepal Scouts were intensified as the time of the expeditions came closer.

As a part of their preparation the participants raised funds in Finland and once in Nepal, they not only participated in the 2nd Nepal Scout Jamboree but also visited local schools and Scout Groups to get more familiar with living conditions in Nepal in particular and the impact of north-south relations in general. 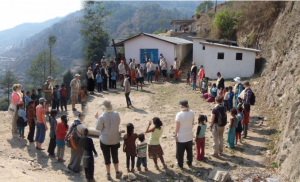 “The partnership project is based on mutual learning from each other”, explains Keshav Bohara, from the Nepal Scout Association (NSA), “The Nepal Scouts are very successful in reaching out to society. And our friends in Finland have a very successful Scout Programme and a certain expertise when it comes to youth participation. So, both parties profit.”

As you read these lines, the 33 Scouts are about to return to Kathmandu. Bad weather conditions finally prevented the Group to reach the summit of Baden-Powell Peak this time, as the Expedition Team reports in its blog:

From the 2013 Expedition’s diary

Back in Finland, Katriina, from the home team supporting the Expedition, explains: “As you can see, the issue of climate change is also discussed in what appears to be remote mountain valleys of Nepal. According to information from local people, this winter has been exceptionally hard, with a lot of snow. But more alarming are the late spring rains, which mean snow in high altitudes such as the Langtang Valley, at times when the plantations of crop should have started already. The locals believe this to be an consequence of climate change. They are convinced that global warming affects the airflows in their mountain valleys and results in more rain and snow.”

Even without the souvenir photo from the top of Baden-Powell Peak, the Expedition returns home with plenty of valuable memories and new friendships! And they have learnt, that the issue of climate change is also discussed in the remote valleys of Nepal.

The partnership project “Scouts for a Peaceful and Democratic Nepal” receives financial support from the Finnish Ministry of Foreign Affairs and from WOSM’s Messengers of Peace fund.