(Neuss & Halle an der Saale/DPSG) – 3 October is a public holiday in Germany. The country and its inhabitants celebrate the “Tag der deutschen Einheit” (Unification Day) and remember the successful reunification of Western and Eastern Germany more than two decades ago.

To mark this year’s Unification Day, Kerstin Fuchs, President of the Federal Board of DPSG, with 95000 active members the largest of the three associations of the Ring Deutscher Pfadfinder, praised the efforts her association had undertaken to help re-launch Scouting in the “new provinces”: “When the inner German border finally fell, one of my predecessors was greeted with a Scouts’ handshake and I am still proud today that Scouts remained loyal to their promise during times of suppression.”

But in spite of repeated efforts since the early 1990s by the different member associations of the Ring deutscher Pfadfinderverbände, the National Scout Organisation in Germany, Scouting still struggles to sustain in the provinces in Eastern Germany. 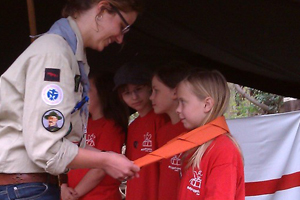 “For the moment, we are focusing our efforts on Thuringia, Saxony, Saxony-Anhalt and the Greater Berlin area”, explained Kerstin Fuchs, adding that it was particularly challenging for DPSG – which is a catholic Scout association, but open to all denominations – to launch local Groups in areas where the majority of the inhabitants are not affiliated to a church.

More recently, DPSG launched a special initiative in the Leipzig-Halle Region and when financial support from the Catholic Church became available, Jan Sommer, a local social worker and Scout, was employed as regional development officer with the clear aim to open new Scout Groups in the area.

And a new, innovative concept was developed: “We sought the cooperation with local schools for which we offered to organise Scouting activities as part of their school-based free-time activities. We also approached students of local teacher training colleges and universities to help run these activities”, recalls Jan.

It appears to have paid off, because Jan was able to report that “this summer, more than 80 youngsters from Halle and Leipzig joined us for a first Scout Camp, among them members from “Siedlung Phönix” in Halle, our newest local Group.