Lithuania: Reflections on “Duty to Motherland” Trigger Off Lively Debate

(Kaunas/LS) – Lietuvos skautija (LS), the National Scout Organisation in Lithuania, is celebrating 15 years of admission to the World Organization of the Scout Movement this year, after many years during which Scouting was prohibited in this Baltic country, which itself did not exist either.

Where does Lithuanian Scouting stand today, after a successful re-launch of its brand, including a redesign of uniform and badges? Most recently, Mantas Sideravičius, Rover Scout Leader in Vilnius, published his personal reflections on a particular part of the Scout Promise in the section of the website of Lithuanian Scouting dedicated to open debate. Here are some of his thoughts:

“We always stress the fact that Scouting is very tolerant movement”, says Mantas, “Scouting welcomes anyone regardless of his or her nationality, race, religion, disability, sexual orientation or other traits according to which society gets more or less segmented”. This is of course also true in Lithuania. “I am wondering how best we could to reach out to other nationalities living in Lithuania and have them join Lithuanian Scouting.”

Mantas explains: “Look at the Scout Promise: ‘On my honour I promise that I will do my duty to God and my country (“šalis” in Lithuanian) to help other people at all times’ one of its components says. The wording is the same in most of the National Scout Organisations, with some referring to their Queen or King rather than their country.” 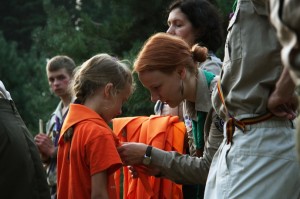 A Young Girl Invested as Scout after Her Promise

But in Lithuania, the phrase reads ‘On my honour I promise that I will do my duty to God and my motherland (“tėvynė” in Lithuanian)’.

Does this specific wording have any impact when it comes to young people from ethnical minorities knocking on our doors and joining the Movement in Lithuania, Mantas wondered: “There are already several examples of local groups formed essentially of ethnical minorities. And it is inevitable that people from other countries and nations will also want to join Lithuanian Scouting. Now, if such a person is planning to live in Lithuania for a short period, he or she would – temporarily – join a Lithuanian Scout Group and participate in its Scouting activities; upon return home, she or he would most likely join a local Scout Group in that country.”

What if someone decided to settle in Lithuania for a longer period or permanently? Mantas: “In such a case, the regulations of Lithuanian Scouting would imply that the Scout Promise is made in front of the flag of Lithuanian Scouting, or in the absence of such flag, the Lithuanian National Flag. In most cases, the latter is the reality.”

Holding the Flag of Lietuvos skautija During a Ceremony

“Now let‘s imagine the situation, when the foreigner wants to join Scouting in Lithuania. He or she will become a member of the organisation simply by paying the annual membership fee. But this alone would not yet make the person a Scout. That’s achieved through the Scout Promise. And if our foreigner now gave the Scout Promise according to the regulations of Lithuanian Scouting, she or he would promise in front of the Lithuanian National (or Scout) Flag ‘to do his duty to his motherland’, which in this case would be a different country.”

And here is Mantas’ point: “I think, such a promise would not be honest. If Lithuanian Scouting changed the wording from ‘motherland’ to ‘country’, this might solve the problem. However, knowing the history of Scouting in Lithuania, such change would result in the Promise losing much of its meaning.”

“You have to know,” explains Mantas, “that during the Soviet occupation Scouting was forbidden in Lithuania and that Lithuanian Scouting survived mainly in exile.”

Mantas finds himself – and according to him sooner or later Lithuanian Scouting – confronted with a dilemma: “One day we will have such a case of a foreigner willing to become a Scout in Lithuania. The question is, whether we are capable of letting this young person become a Scout in our organisation. Altering our Promise to be universal for all nationalities would ruin our heritage, cherished by so many for so long a time. And leaving it as it is now would mean that the new Scout promises to do his or her duty to a country which is not her or his own.”

And Mantas ends his reflections by asking: “What could be the compromise enabling Lithuanian Scouting to keep a long lasting tradition while at the same time be more cosmopolitan?”

So, how would you answer Mantas? Any suggestions?

The original article from Mantas Sideravičius.
And more details about Scouting in Lithuania on the website of Lietuvos skautija and on their facebook page.