The Project on Recognition of Learning in Scouting Succesfully Concluded

(WSB-ERO/SN/Leusden) – After two years, the Recognition of Learning in Scouting (ROLIS) Project, came to an end in August 2012. During an evaluation meeting hosted by Scouting Nederland, representatives of the project team from the participating eight National Scout Organizations (NSOs) from across the European Region of the World Organization of the Scout Movement (WOSM) reviewed achievements and considered how best to address remaining issues within WOSM and WAGGGS in the future .

Pavel Trantina, from the Czech Republic, felt that the ROLIS Project had inspired his association and had encouraged a fruitful internal dialogue. It had also offered the possibility to share tools used by other NSOs and to exchange experiences made in applying them. Other project participants welcomed the benefit of having fixed moments to work towards achievements and to use meetings to reflect and be inspired for new and innovative actions.

During the project, it had also become transparent that the realities in various European countries were quite different. Consequently, the team had to realize that the development of a common framework for recognition of learning in Scouting was not possible for the time being. However, all involved NSOs were reassured that the efforts towards recognition within their countries they had already undertaken or were envisaging launching were the good ones. 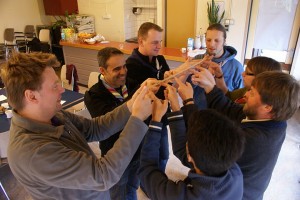 Paz Almendros, from Spain, explained that the situation in her country and in the project launched by her association was so much different from the other national projects, that it had been difficult to get any additional practical advice. But  the ROLIS project had helped bringing together regional members of the Spanish project team who were able to work together with encouraging results.

Throughout the course of the ROLIS project, most of the involved NSOs had had plenty of opportunities to take back something useful for the benefit of their national projects. What was missing, however, was continued multilateral communication between meetings of the project team.  The opportunity to create a sustaining formal platform for ongoing exchange of news and other related information was missed. But the project team members expressed their hope that the informal network would remain and that a more or less regular dialogue would allow the participants to continue sharing matters of common interest.

During the meeting, the ROLIS team members also identified several topics, which were considered being worth being taken up in the near future. These included “creating a common language for a competence based training framework”, “recognition by employers of formal recognition of qualifications” (connected to the European skill set), “validation methods, in particular looking at existing methods and provide a link to the labour market”, and “development of an E-learning tool that can be used throughout Europe”.

Last but not least, the European Region of WOSM itself also benefitted from the ROLIS Project. This was one of the first times that the management and running of a Region-wide project was completely ‘outsourced’ to one of the member associations, in this case to Scouting Nederland. Scouting Nederland’s proposal, initiative and leadership was highly appreciated. And it is hoped that this successful project will inspire many more NSOs and NSAs in Europe (and beyond) to engage in matters related to recognition of learning in Scouting.

Find out more about the ROLIS Project on the web.