(BíS, Reykjavík) – For the seventh time, Fréttablaðið, one of Iceland’s leading newspapers, honoured individuals and organisations with its Annual Community Award.

During a special ceremony on Thursday, 14 March 2012, H.E. Ólafur Ragnar Grímsson, President of Iceland, presented Bandalag íslenskra skáta (BíS, The Icelandic Boy and Girl Scout Association) with this year’s Award in the category “From Generation to Generation”.

“We are extremely proud to receive this recognition”, commented Hulda Sólrún Guðmundsdóttir, International Commissioner of BíS. “The Award acknowledges the educational offer and value as well as the intergenerational activities of Scouting and Guiding in Iceland during the last 100 years, which continues to attract large numbers of young people across Iceland”. 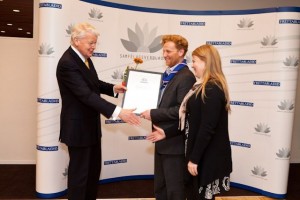 “This year is the centenary year of Icelandic Scouting and Guiding and this Award is an additional cherry on top of our birthday cake”, added Chief Scout Bragi Björnsson, who received the Award on behalf of BíS, adding that the National Board was very happy to start the centenary celebrations in such a way.

The Award wants to highlight projects which set good examples and whose initiators can serve as role models for others. It has four different categories and honours good deeds and outstanding community services and also includes an Honorary Award given to an individual for lifetime achievements.