The Partnerships event begins in Paris!

The Partnerships Event has officially begun! All of  the participants have arrived in Paris under the shining sun. There are approximately 30 nationalities gathered in Paris,and the youth hostel in which participants are accommodated during the event has turned into a genuine Babel Tower. Participants were warmly welcomed and participated in a game in order to get to know each other; following that the participants all crossed Paris to be officially welcomed at the national headquarters of Scouts et Guides de France. During the welcome, the national French delegation welcomed every participant  – reminding them that the North-South network was a major opportunity to foster and enrich partnerships;  and to also be a tool to enrich common educational values. Philippe Bancon highlighted the fact that this event provides a great opportunity to focus on the concept of solidarity, which is not only a North-South dynamic, but also South-North, South-South, and North-North. 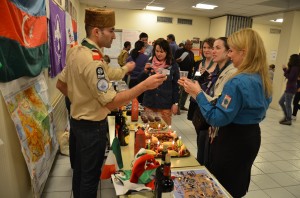 Banjamin comes from France and he is Assistant on Cooperation and Advocacy on Development at the European Scout Office. He is following the Region's work on Partnerships with other Regions and on international development issues.