(OBS/Biser) – Monday, 6 February 2012. Just another calm and peaceful day in Biser, a small village in Southern Bulgaria. Then suddenly all literally turns upside down. The unimaginable becomes reality without warning. The dam protecting the village from the nearby lake gives way and ice-cold water quickly finds its damaging way towards the village. With no further protection houses are flooded, cars, trees and other material ‘swallowed’ and carried away or left in ruins. With the devastating waters not only calm and peace was gone, but also shelter, warmth and food, leaving scared and lost inhabitants exposed to more unfriendly elements, like ice, snow and cold winds. Very quickly a crisis centre is set up and help organized in the immediate region and across the country. 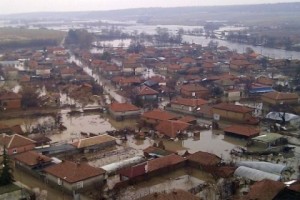 And from the beginning members of Организация на Българските Скаути, the Organisation of Bulgarian Scouts (OBS, the National Scout Organisation in Bulgaria) were part of those engaged in disaster relief work. OBS launched a nationwide campaign and all available communication channels were used to mobilise Scouts and their families and friends to donate most urgently needed items. The National Scout Centre in Shumen as well as Scout halls in major cities were designated collection points. Rovers, Senior Scouts and Leaders were soon busy sorting out clothes and packing bags with old and new clothes, jackets, winter hats, scarves, gloves and wool blankets. More than 250 bags (each containing 110 litres) were ready to be taken to Biser after less than 48 hours. And more than 1’000 kg of food donated by groceries and wholesalers was packed in boxes.

Yesterday evening everything was loaded on a big lorry in Shumen. A group of volunteers is accompanying the transport – including Dobo and Tisho, National Coordinator and Chief Scout of OBS, respectively. The lorry with its precious cargo is expected to reach Biser later today.

OBS and its members continue to be alert and are ready to provide further assistance should the conditions in Biser remain critical in the cause of the coming days.