Volunteering Working Group has met in freezy Prague over the last weekend in order to evaluate its first year of work and to prepare to deliver its support to the European Scout Region and NSOs in 2012. 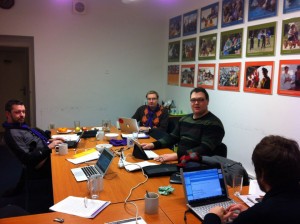 After a review of how do we fulfill our tasks in the Regional Plan, we continued with the requests for tailored support to NSOs and preparations of our input to the upcoming events (such as Roverway and Forum on Youth Programme and Adult Resources). The VWG also received an update on the results of the European Year of Volunteering 2011, where Scouts played an important role as a member of the EYV 2011 Alliance and contributed significantly to the drafting of the Policy Agenda for Volunteering in Europe (P.A.V.E.). Future of the successful cooperation between volunteering networks will be discussed over the next few months with our active participation. In this regard, co-operation with our colleagues from WAGGGS is important, so we have connected with them via Skype in the evening to plan joint actions.

Finalization of the Framework paper on Managing Adult Resources and its on-line version and our contribution to the renewed Position Paper on Volunteering were among other topics of the meeting, as well as the development of a Euro.Scout.Doc on Scouting and Volunteering, which should summarize best practices in the field, gathered especially during the last European year. We are looking to be in contact with you in the months to come!