The Volunteer of the Year 2011 in Romania is a Scout 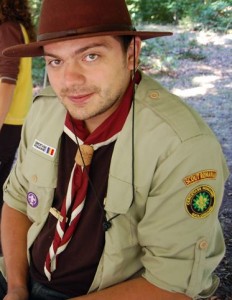 Andrei Avram, the leader of the Alba Iulia Scout Centre, was elected on Monday evening as “The Volunteer of the Year in the field of Education”. He was elected from a pool of finalists including representatives of NGOs and foundations from Bucharest, Cluj-Napoca and Bacau.

The distinction confirms the results of his more than 10 years of volunteer dedication to Scouting, a movement based on the principles of volunteering and non-formal education. Besides his role as a leader of the local Scout Centre, Andrei is also the Vice-President of the Romanian Scout Association which, in turn, was awarded the 2nd place in the competition for the “NGO of the Year in Education” earlier this year.

“RoJAM 2011 – Take the Next Step”, the 1st Romanian Scout Jamboree after the re-establishment of the association following the fall of Communism, was selected to be among the 6 finalists for the “Volunteer Project of the Year in the field of Education”.

Radu comes from Romania and is the Director of Youth Programme in the European Scout Office. He is following the Region's work on Educational Methods and Youth Empowerment.