(Luimneach/Scouting Ireland) –As part of their training for next year’s inaugural “Tom Crean Challenge”, a high adventure Scouting expedition organised by Scouting Ireland in Iceland, Andrew, Conor and Michael and their friends from 23rd Limerick Scout Group (Ireland) tested their physical and mental resistance in a spectacular fundraising challenge. The plan was to visit Ireland’s lowest and highest geographical points during one single 48-hour expedition!

Unfriendly autumnal weather conditions added to the difficulties the party was to encounter on their ambitious challenge, which saw the group of 15 Scouts first descend and bivouac some 100m below surface in Poll na gColm (County Clare), Ireland’s longest cave system. 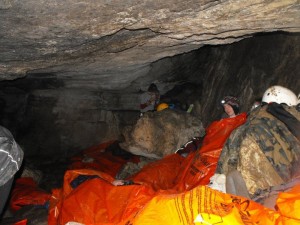 “The cave was dark, damp and cramped”, recalls Conor, adding that these conditions by no means prevented his group from having fun and enjoying their adventure. In the morning, down pouring rain welcomed them back to surface, and after a rich Irish breakfast (sausages, rashers, eggs, beans, bread and tea) the three adventurers and their friends headed off to County Kerry. “The route we chose to reach the summit of Corrán Tuathail (with 1’043m the highest mountain in Ireland) was quite challenging”, explains Michael, “in particular for the mountaineering novices of our group”. “Before climbing to the top”, adds Andrew, “we spent our second night in an improvised bivouac under the cloudy and wet night skies of the beautiful Kerry Mountains”.

And after considerable efforts, Andrew, Conor and Michael and their friends finally reached the top to celebrate the success of their “High and Low Challenge”, confident that this exercise would pay off, when the three Scouts would be participating in the “Tom Crean Challenge” in Iceland in February 2012.

Some useful websites for additional information: