VCP Scouting and Guiding is Growing – Want to Bet? 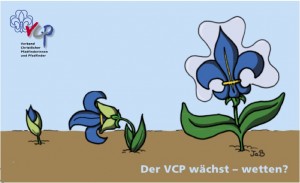 The Verband Christlicher Pfadfinder und Pfadfinderinnen (VCP, one of the German National Scout Associations) has reconfirmed growth as one of its priority areas. The focus is on various aspects: on the programme side by introducing more and more interesting activities for its members, qualitatively by further improving its events’ and training offers and quantitatively by increasing its membership.

In order to encourage all levels of VCP to play an active role in this process, the association has asked its regions, districts, groups and units: “VCP is growing – want to bet?” And what makes this bet so interesting is the fact that everybody will win: the different units and groups but also VCP altogether. The initiative follows a recent decision of VCP federal assembly, by which increased membership numbers will result in lower individual membership fees.

Thanks to contributions received from corporate partners, an initial amount of EUR 5’000 has been put into the betting pot – and an increase of this amount is not excluded. In order to win, VCP has to increase its membership numbers by 1’000 each year over a five-year period. The group announcing the largest annual net-increase will receive a VCP Scout Shop coupon worth of EUR 750, groups with the second and third largest net-increases will receive coupons of EUR 500 and EUR 250, respectively. Should the target of 1’000 new members per year be missed, the money will remain in a jackpot, only to be shared when the bet will have been won.