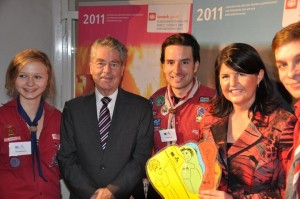 A delegation of 15 Scouts and Guides of Pfadfinder und Pfadfinderinnen Österreichs (PPÖ, the National Scout Organisation in Austria) was present when more than 600 representatives of Austrian NGOs came together at Salzburg Palace. They gathered to celebrate the official start of the European Year of Volunteering and met with H.E. Heinz Fischer, Federal President of the Republic of Austria, and members of the federal and provincial governments.

In his address, the President emphasized the vital role of volunteer commitment for local communities and the Austrian society in general. More than 3 million Austrians (more than a third of the population) invested much of their spare time to the benefit of the country and its inhabitants.

Other speakers, including H.E. Gabi Burgstaller, Governor of the province of Salzburg, and Thomas Geierspichler, Paralympic Gold Medallist and EYV 2011 Ambassador, underlined the important contributions of volunteers in all areas of society and welcomed the opportunity of the EYV 2011 to showcase the different aspects of the valuable and ‘timeless’ work of volunteers to a wider audience, both in Austria and throughout Europe and the world.

Briefly commenting on the event, Lisa Höllbacher, member of PPÖ’s Youth Council, said that Guides and Scouts in Austria played their part in promoting the valuable volunteer work both within the organisation and outside. She hoped that the European Year of Volunteering 2011 and related activities would encourage even more citizens in Austria and other countries to engage as volunteers on local, national and international levels. She also recalled that social skill building and empowerment of children and young people were integral part of the educational programme of the Scout and Guide movements and contributed to the development of local society and the living environment.